Hope you are well and enjoying the brief glimpses of the summer sun. I was lucky enough to get out in the best of it on Sunday for the first photoshoot for the new album.

The session only lasted an hour but Raymond Lee who was behind the lens captured some great shots that really captured the atmosphere I was looking for. The first of the shots is up on my site www.jackcade.com if you want to see the results. I hope you'll think, like me that it's really kinda cool. It's shot in the style that was used during the 70's on a lot of blues and Motown album covers. For those of you into your photography I'll be posting up some details on the site later regarding the equipment, setup and postproduction photoshop work that was carried out. 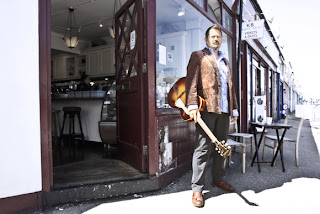 Along with the album completion myself and Tom are setting up a new label, resurrecting my old label name from the 90s, Collision Records.

As well as the Jack Cade album we'll be looking for other artists to record and release, we have a few in mind already, but are looking for more Berkshire based talent, for more info email jack@jackcade.com

Anyway enough of my blathering... Catch ya later

Find out more at www.jackcade.com

- Posted using BlogPress from my iPhone

Gearing up to mix

This week has been spent putting together the artwork for the album. Writing songs is one thing but writing cover notes is a whole other thing altogether and my brain is a hurting.

Off into the studio to start the mixing from this weekend, we're in the final straight and the finish is in site, I've been listening to the rough monitor mixes on my stereo at home and am amazed at how good it's sounding already, Tom's done great at giving all the instruments there own space, and believe me that's no mean feat on some tracks running 3 guitars, mandolin, banjo, keys, drums, bass, horns, percussion and vocals!

For the vocals we've used a Neumann TLM49 which has captured my vocal perfectly, sounds like I'm sitting in the room with you, a scary thought for some maybe.

The new Jack Cade website will be up and running in the next week, so yet another digital presence to manage, along with the Twitter, Facebook, myspace (not sure this'll be going to much longer) reverbnation and blog.

Right now to the important business, the pint of Tribute ale sitting in front of me on the in the Nags Head... Luscious...

Find out more at http://www.jackcade.com


- Posted using BlogPress from my iPhone
Posted by Jack Cade No comments:

The end of the road is in site

Hey All, it's been a while since the last Jack Cade websiteupdate, due to having my head buried in the recording and a few gigs.

Had a great time over the Spring Bank Holiday playing at Betties Blues at The Butler, followed by a gig at Rhu Bar Basingstoke in Basingstoke and back to Deja Vu in Reading the following weekend.

In between gigs I've been finishing off the Fiery Road, laying down the vocals over 4 studio sessions, giving my vocal chords a right battering in the process. But I'm well pleased with the end results, and as we move into the final phase of mixing I've got a great feeling about the end result that is just in reach.

Myself and Tom Anderson who is producing the album are in the process of setting up a label and have a few other acts in mind to release over the coming months, but more of that later. For now the focus is on the release date for the Fiery Road which is provisionally looking like Friday 29 July 2011.

Prior to that there will be a few limited digital only releases available via my Reverb Nation site, Facebook and MySpace, so keep a lookout via this blog, twitter.com/jackcadeness or the other aforementioned sites.

Find out more at http://www.jackcade.com
Posted by Jack Cade No comments: